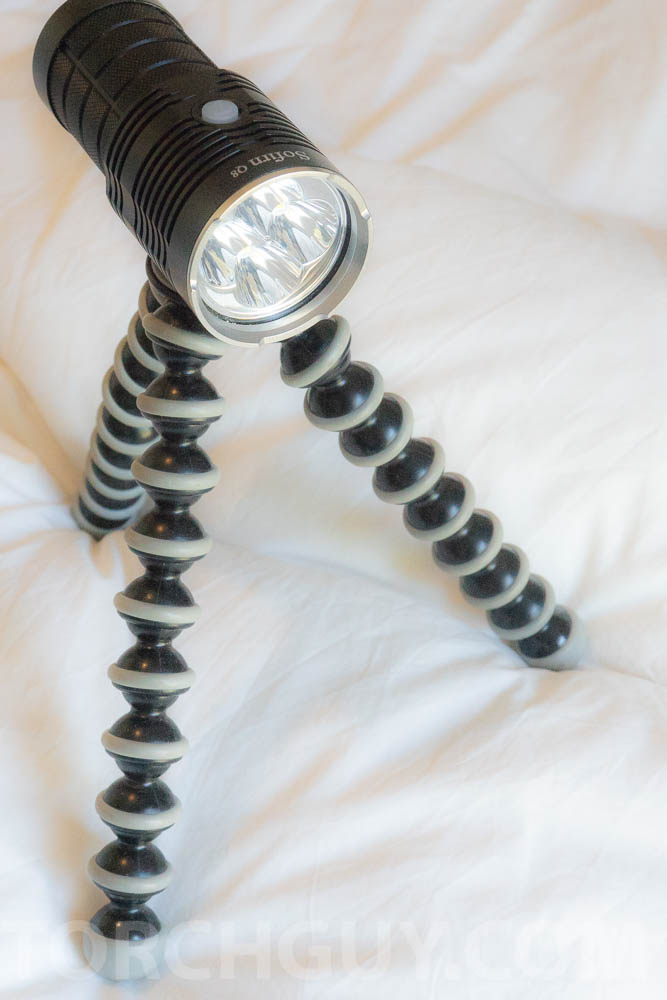 The new Q8 illustrates the power of the internet – it was developed by ThorFire in response to discussions on budgetlightforum.com, and refined by Sofirn following hundreds of pages of feedback from torch enthusiasts.

The result is a torch the size of a can of Red Bull that blasts a gobsmacking 5,000 lumens over 628 ANSI metres (using the formula applied by other brands) or 200 real-world metres (with ten times the illumination of ANSI)! That's two rugby fields end-to-end, people!

I've called it the "Quad" because it's fitted with four of Cree's benchmark XPL HI LEDs and powered by four industry-standard 18650 lithium-ion batteries, and also because it's perfectly at home in the gnarliest of outdoor conditions.

With a fully charged set of Li-Ions, the Quad delivers peak output for three minutes before stepping down to avoid overheating, an impressive 2,500 lumens for three hours, and moonlight mode for a couple of months – or anywhere in-between, thanks to infinitely variable brightness (ramping).

The Q8's single-button interface is a masterclass in design. Apart from the obvious benefit of single-handed operation, it provides instant access to moonlight, low, last-used level, turbo, and ramping from 10 to 5,000 lumens. The button is backlit to make it easy to find in the dark (although you can easily turn the backlight off) and it can even show the voltage of your batteries!

Another clever detail is that the batteries are installed in parallel, which means the Q8 can work with any number of Li-Ions between one and four, although they need to be good quality button-top cells. Obviously four batteries will run longer than one, but the torch weighs much less with fewer cells, which is great news for all those hikers out there!

The Quad boasts a standard tripod screw-mount but it doesn't have a hole for a lanyard (so it's worth investing in a screw-in camera-strap holder from a photographic store) and it can tail-stand and bounce its beam off the ceiling to light up the largest room during load-shedding.

In short, this torch has the soul of a hunter-explorer, but the manners of a perfect gentleman.

However, within this powerful easy-to-use torch there lurks a completely different personality – a blend of garage mechanic and rocket scientist. If you know how, the Q8 offers a massive array of programming options, and it's one of the most popular flashlights for "modders" who can't help reaching for a screwdriver and soldering iron whenever they're confronted by a fine piece of engineering.

I'm not even going to try to describe all the stuff you can do with this alter-ego – if you're interested (and brave) go here – but the good news is that you and I will only meet the gracious Dr Jekyll unless we deliberately go looking for the uncouth Mr Hyde. I reveal his location in my Operating Guidelines, but what you do when you find him is entirely up to you – and could even void your warranty!

Since I received a sample of the Quad it's lived on my nightstand – it's easily the best bumps-in-the-night torch I've ever owned! It's hard to knock over and easy to turn on in the dark, even when the backlight in the button is turned off, and I can ramp up from ultra-low to maintain my night vision or go straight to the shockingly bright turbo even when I'm half asleep.

During load-shedding I mount the Q8 on a Gorillapod so I can point it at a ceiling or a wall to provide even lighting wherever I need it, and attach it to just about anything. The Quad also makes a brilliant all-weather lantern with the optional diffuser.

This torch is forged from aerospace-grade aluminium, hard-anodised to military specifications, and crowned with a stainless steel bezel and reinforced glass lens. It's IPX8 waterproof and impact resistant while advanced temperature regulation (ATR) protects against overheating and sophisticated voltage regulation ensures constant brightness, regardless of the state of the batteries.

As we've come to expect from Sofirn, the Quad is not only beautifully made but also offers exceptional value for money! And, as with all my torches, you can save a chunk of cash if you pay by EFT-on-invoice – just drop me a line for details.