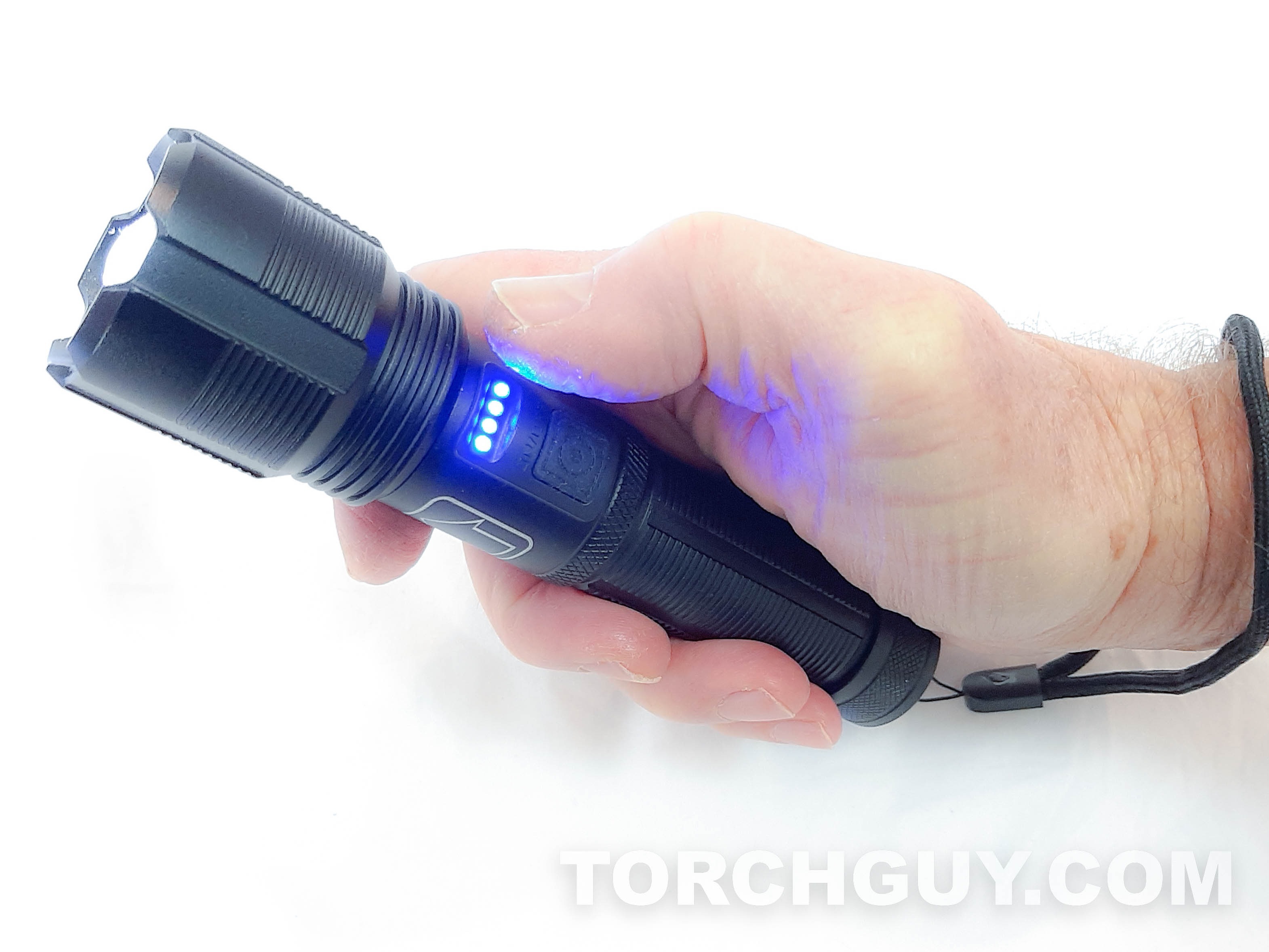 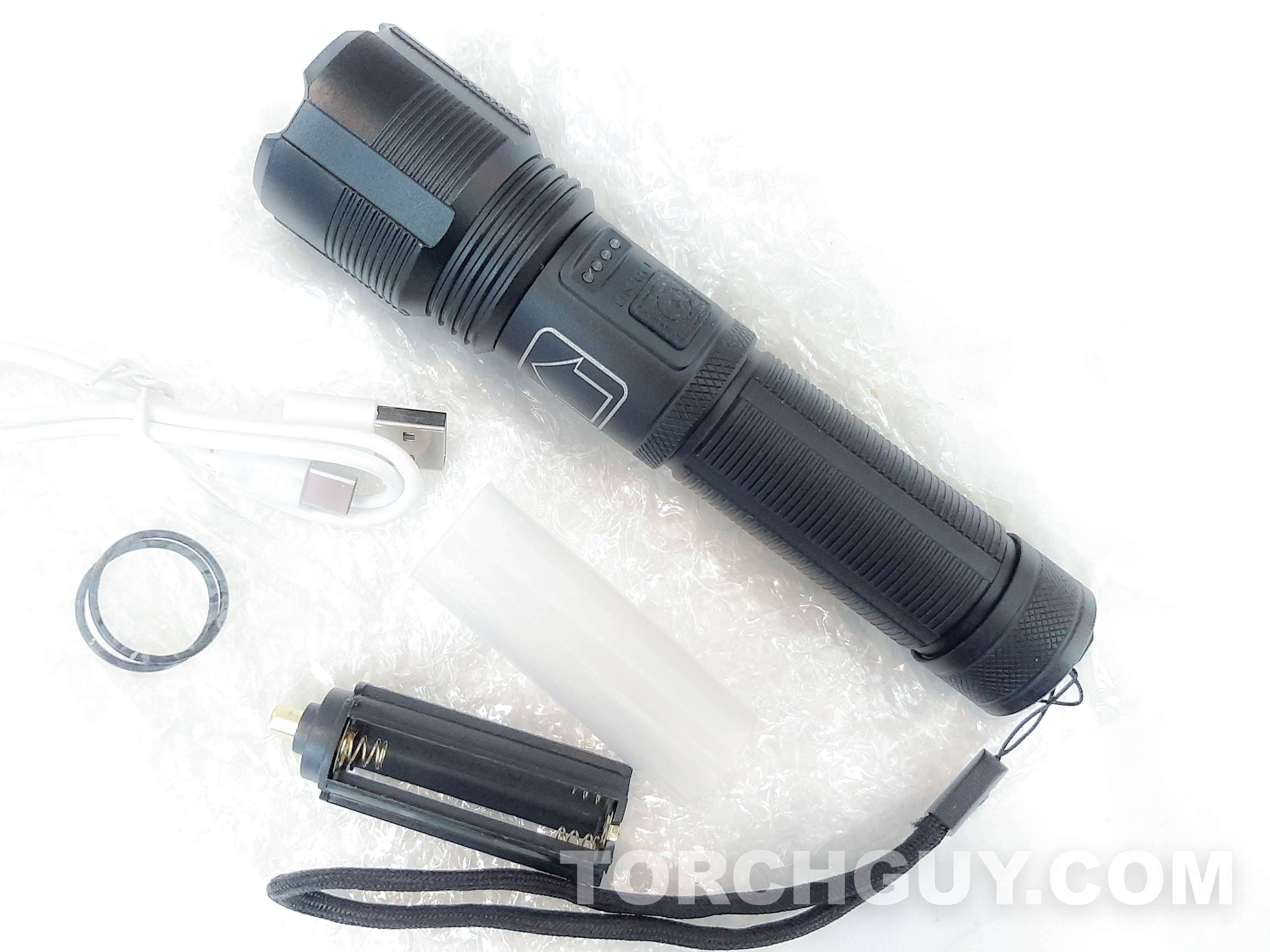 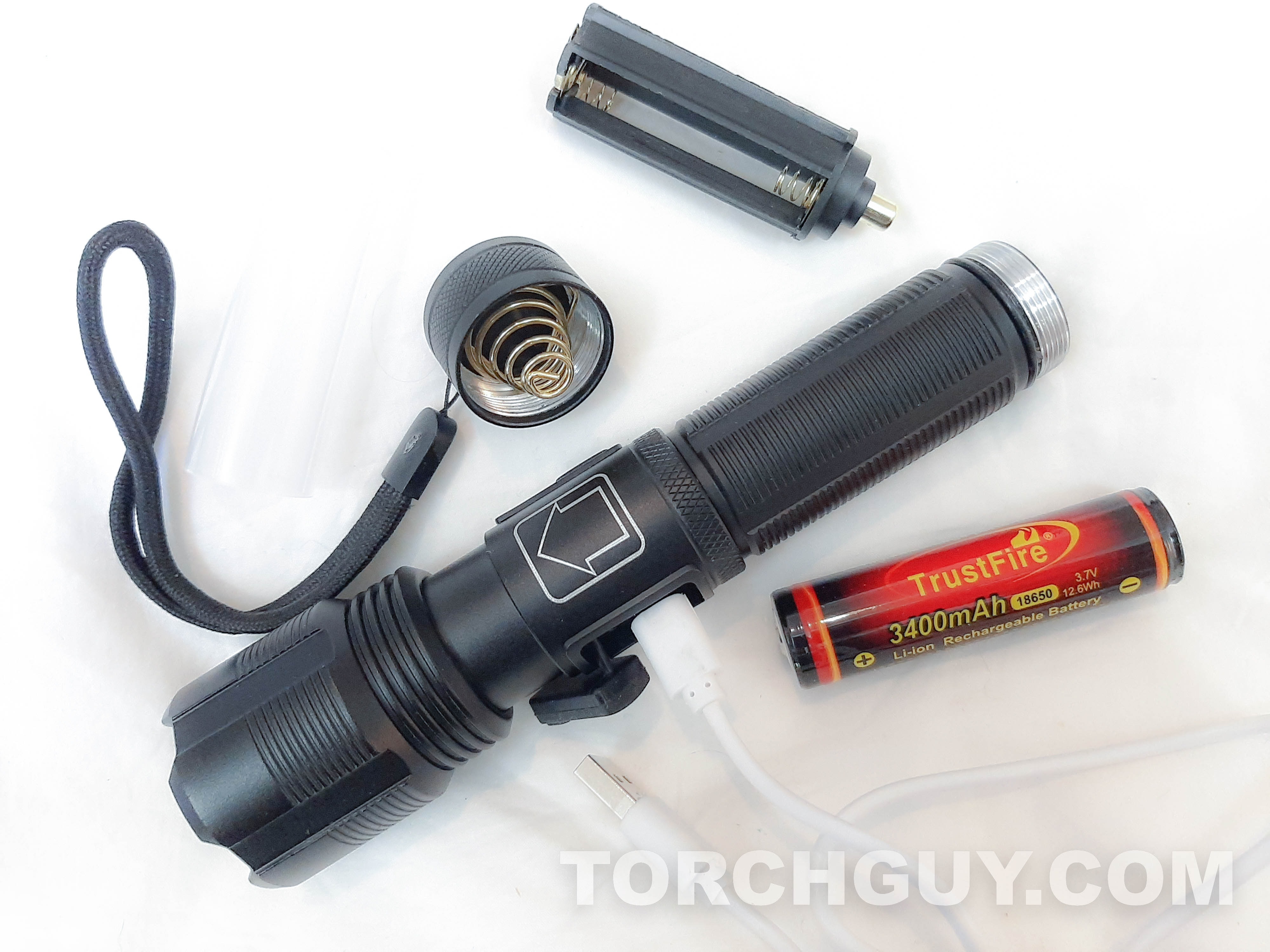 My torches are brilliant value – ask anyone who has one. The reason is that I import and sell direct, work from home and have no staff (unless you count the long-suffering Mrs Torchguy) so there are no middlemen or overheads to push up my prices. Even so, quality doesn't come cheap, and cheap torches can be really nasty!

So I was sceptical when I heard about a torch that was promoted as being "used by the Navy Seals" and "twenty times brighter than a regular flashlight"... for under a grand! When I looked into it I found this torch – known in the trade as a G700 or an X800 – is a modest performer that's available from the factory for less than a hundred randelas!

What was pushing up the online price, apart from the cost of their advertising, was that it was bundled with a bunch of crappy accessories including a cheap lithium ion (Li-Ion) battery and charger, all served up in a dreadful plastic suitcase which inflates the cost of shipping and therefore the price of the torch. In case you didn't know, a cheap Li-Ion won't last and could burn your house down (which is why airlines won't carry them) and a bad charger will kill even a good Li-Ion very quickly.

However, when I got one of these torches to try out, I found it really wasn't bad... for the money. It's pleasantly bright and has a smooth zooming action, along with five modes (high, medium, low, strobe and SOS) accessed via a slightly awkward user interface. It doesn't feel cheap, although it's certainly not in the same league as my premium-grade torches.

Best of all, it comes with a cartridge to take three AAA supermarket batteries, so you don't have to use it with a Li-Ion which, if it's worth owning, will cost two or three times as much as the torch itself... as will a decent charger. I call this torch the G700 Gift – "G700" so recipients can Google to see how powerful and expensive it... isn't really (hey, I don't make those claims!) and "Gift" to remind us what great value this little torch really is.

We sell the Gift for R99 each in bundles of ten for R990 (plus R120 delivery) or twenty for R1,980 with free courier delivery. To keep my price down it doesn't come with any batteries or even a box (just bubble wrap, so you can wrap it your own way) but it does come with a lanyard, adapters for different types of battery and a six-month limited warranty.

We've been selling the Gift for several years now and the demand has been so good that we decided to import another zoomer which I'm calling the G1000 Grab – because you'll really want to grab it when it's on the prize table at the annual golf day, and to have a bunch of them within grabbing distance when the lights go out. Again. They are also must-haves for your grab-bag and in your car for emergencies.

The G1000 Grab is a significant step up on the G700 Gift. It's equipped with a clone of Cree's benchmark XHP50 LED, delivering more than twice as much light as the Gift (although the broader beam means it doesn't actually shine further) and featuring a battery status indicator and internal charging via a USB-C port – so you can charge a Li-Ion with a cellphone charger, in a car, or just about anywhere.

It delivers a lovely even circle of light at the two extremes of the zoom, reaching 65 real-world metres (200 ANSI metres) at one end and around 20 real-world metres at the other. It runs at full power for up to four hours with a fully charged Li-Ion before the battery-status indicator shows the battery is exhausted. At half power it should run the whole night and at a quarter power you'll get a useful amount of light for a couple of nights.

Even serious torchies will love the Grab – it makes a great "disposable" torch to give away on an impulse or use in high-risk places, and both the Gift and the Grab make terrific "retirement homes" for old Li-Ions that still hold a charge but don't run very long. Take them with you on your travels with AAA cells – airlines don't mind carrying supermarket batteries, and you can buy them just about anywhere.

We're selling the Grab in bundles of five with no batteries for R1,495 (R299 each) plus R120 delivery or with Li-Ions and free delivery for R2,495 (R499 each). Like the Gift, it comes with a lanyard, spare o-rings and adapters, including a cartridge to take three AAA batteries, and the G1000 also has a USB charging cable.

Note, too, that you can order either torch in batches of 100 with your name or logo printed on them at NO extra cost, but with a 2-3 month turnaround, so if you're dreaming about a light Christmas, please get in touch (mark@torchguy.com) and let's make it happen!